On Friday, I did something I’ve never exactly had on my bucket list: I ate a tarantula. Our group stopped in Skuon, nicknamed “Spiderville,” on our way to Siem Reap to try the famous (infamous?) fried tarantulas. Tommy and I discussed this beforehand: Should we or shouldn’t we? However, it seemed like one of those things a person should do while in Cambodia, just to say she did.

That was until I got off the bus.

Awaiting us at Skuon was a wide variety of fried bugs, literally everywhere. The bus ride had been hot and bumpy, I wasn’t feeling so great, and, seeing great piles of black crispy spiders and other insects all over the place,  suddenly my desire to eat a tarantula “just to say I did” was diminished to nothing. Plus, a handful of kids were running around selling fruit to the silly American tourists and also, scaring the silly American tourists with live tarantulas.

The good news is, they targeted Tommy and not me.

The kids at Skuon are incredible salespeople. First of all, they are remarkably persistent. Second of all, they employ tactics such as crying, pleading, and chattering your ear off to get you to buy a dollar’s worth of fruit. There was one little girl whose pineapple I didn’t buy, and she gave me the most attitude I’ve ever seen from a tiny person — hand on hips, eye rolls, the whole works. Attitude clearly transcends language barriers. She also followed me to the bus when we were leaving, found my window and glared at me until we pulled away. I have to say, for two feet tall she was actually kind of intimidating.

One little girl who latched onto Tommy, however, simply employed the friendly tactic. From the moment Tommy got off the bus, she shadowed him. She showed him around, talked to him about America, and also made some hilarious comments about his eyes. “You have really blue eyes! You have long eyelashes! And they are curly, like a girl! Do you wear makeup?” She was quick to point out that she and I both had hearts on our bracelets. And she even helped us when we finally decided to eat a tarantula. 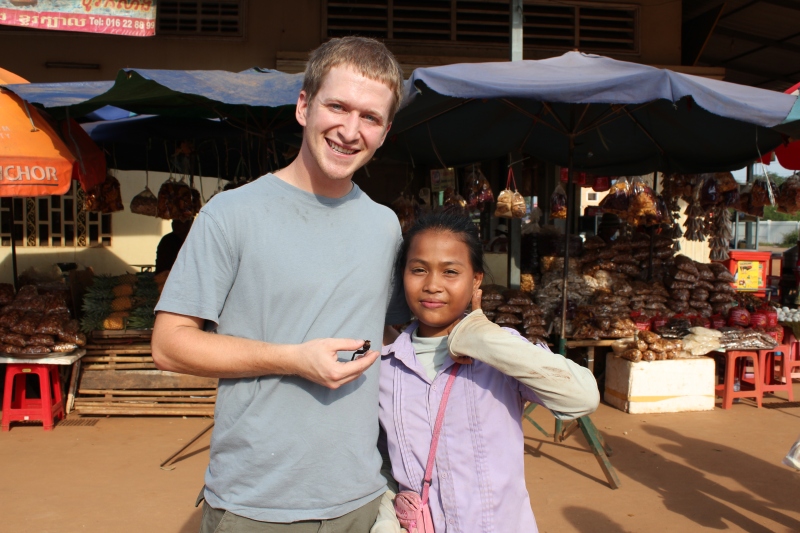 Yes, we did finally try one. And Tommy bought a bag of pineapple from her just to wash it down. Her friendly tactic worked pretty well in the end.

It wasn’t the worst thing I’ve ever eaten, but it was, not surprisingly, pretty weird. It tasted like burnt char with a flavor that I can only assume is unique to spider, considering it was unlike anything I ever tasted before.

At least now I can say I did it, right?