A week ago, there were threats of snow in North Dakota, most of my meals were coming from the basement freezer as I tried to frantically pack and wrap up the last few days of my job, and my little Ford Escape took me everywhere I needed to go. Now, there are warm rain showers every day, most of my meals include noodles or rice, and we ride everywhere in tuk-tuks.

I love all those pieces of home, but Cambodia so far has been pretty awesome. Tommy and I are hanging out in Phnom Penh, Cambodia’s capital city, for two weeks for TESOL training before we go to volunteer teach in Thailand. We have class every day from 9:00-5:30 and get the evenings to hang out at the hotel, explore Phnom Penh, or do homework. Here’s a little update on what I’ve experienced in Phnom Penh so far:

FOOD: We have been trying some of the local food since we got here: amok, lok lak, and some strange little salt-and-sugar rice cakes I found at the convenience store, to name a few. My favorite so far was Tommy’s lok lak dish, basically a pile of beef, rice, sauce, and a fried egg on a plate. Oh man, it was good. My stomach has been a bit gurgly the last few days, but I was expecting that. At least I haven’t gotten food poisoning yet. With my luck, it’s probably inevitable at some point.

TRANSPORTATION: As for getting around, we have been escorted everywhere by tuk-tuk, which is basically a four-person carriage pulled by a motorbike. Most of the locals, however, drive motorbikes, or motos. The traffic is absolutely nuts. There are lanes painted on the roads but no one pays too much attention to them; they are more like general guidelines. The moto drivers cut each other off, travel in huge swarms, drive down the wrong lanes and pull in front of oncoming traffic all the time. They actually have amazing skills. They are within inches of an accident at all times and never even blink. They text and drive, and they phone and drive. They ride two or even three or four to a bike. We have actually seen a family of five driving down the street on one motorbike. Twice. (And people think my family is crazy.) The amazing thing is, none of them really get mad. Cambodians are cheerful. This would not happen in America: road rage would run rampant.

I am not the first Westerner to marvel at this incredible transportation system, nor will I be the last. However, Tommy and I have both agreed that the traffic is our favorite part. Especially since we’re not driving. (Then my amusement would probably turn into utter terror.) The motorbikes do look really fun, but these drivers have mad maneuvering skills which I’m pretty sure I don’t possess. They say many tourists to Southeast Asia have died or been seriously injured by renting motorbikes. Considering I really haven’t driven a motorcycle much back home, I don’t think I will try to learn how in Cambodia.

WEATHER: Cambodia is currently nearing the end of its rainy season, meaning the weather is generally humid, the temperature is in the 80s or 90s, and at least a couple heavy rain showers hit every day, lasting anywhere from 10 minutes to a half hour or more. Don’t worry; this doesn’t affect the volume of traffic. Instead, all the moto drivers come out in full force wearing brightly colored ponchos. I even saw one zooming down the street holding an umbrella during yesterday’s heavy rain.

RANDOM TIDBIT: We were quite amused to find out that you can go to the local shooting range right down the street, and for $10 you can fire off AK47’s, for $50 you can toss a grenade and for $350 you can shoot a rocket launcher. We haven’t done this yet. Maybe I will toss a grenade before I come home.

Or maybe the traffic is a big enough thrill for now.

Hope all is well back in the states! Don’t worry about me in Cambodia. For now, I’m perfectly happy eating rice and zooming around in a tuk-tuk. 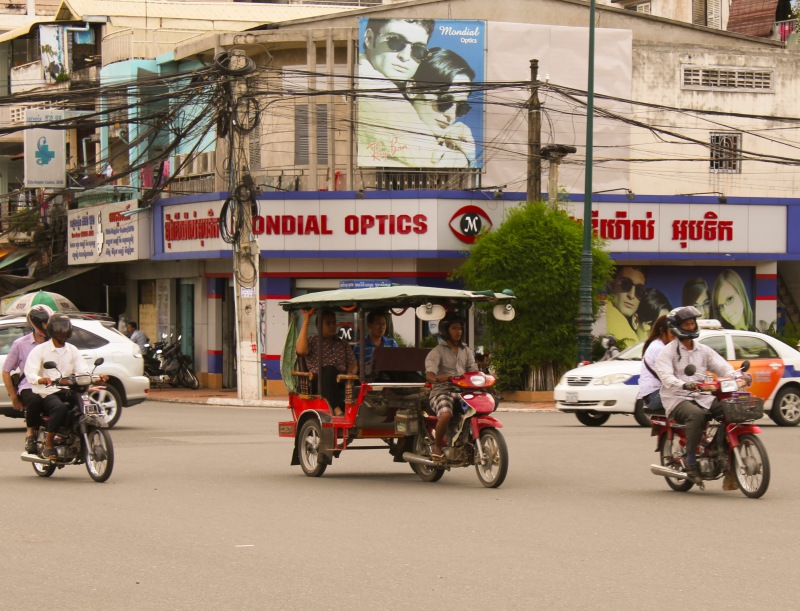