We had exactly one week to spend in China, and we needed to travel 2535 kilometers in that one week (not including a short trip to Hong Kong smashed in there), and we needed to stop and see some of China along the way, too. We were willing to meet this challenge with the help of one very important asset: China’s high-speed train system. After several years of construction, this train system is both the longest high-speed rail system in the world and also the most heavily-used in the world.

A little summary of our 2535 kilometers through China by train:

We landed in Guangzhou, a major city in the south of China, on the Thursday night that we had left Bangkok for the last time. I tried to swallow some of my sadness over leaving Thailand by focusing on the challenges facing us in China: Mainly, how the heck were we going to make it to Tommy’s friend Brady in Shenzhen when we didn’t know a piece of the language, we wouldn’t have phone access to find him, and generally, we didn’t have a clue what we were doing? (Read: Silly, lost, clueless tourists in a very foreign country.) But with all four of our silly tourist heads put together, we managed to get it done. We had printed the Chinese address of our hotel to give to the taxi driver at the Guangzhou airport. Our hotel in Guangzhou turned out to be lovely, and the receptionist helped us get a cab to the correct train station the next morning. At the train station, we were helped by an exasperated employee who managed, through many gestures and basically by pulling the correct money out of our wallets herself, to get us four tickets to Shenzhen, our first 139 kilometers by train. In Shenzhen, thank goodness, Brady found us where we had agreed to meet and escorted us to his apartment and throughout the city of Shenzhen.

Here we are, happy to have made it to Shenzhen. This would start our long, increasingly-colder journey north to Beijing: 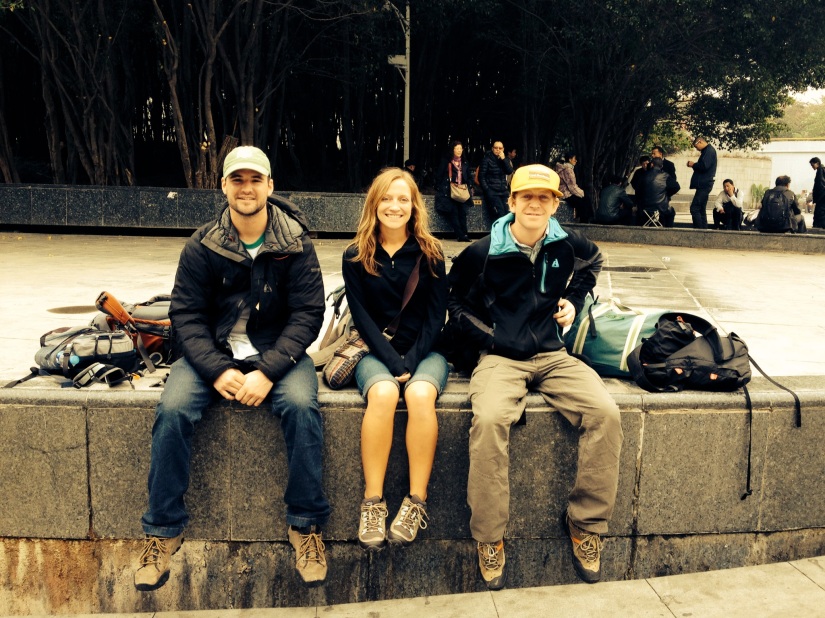 Because Shenzhen is near the China-Hong Kong border, Brady also escorted us to Hong Kong and back for a night. I only wish that we had more than one night to spend there, because it was a pretty amazing city. We took the ferry out into Victoria Harbour to see Hong Kong’s skyline; we ate burgers and drank ale at a delicious diner; and we stayed out late to enjoy the local nightlife. We were only there for a total of about 16 hours, but I’m glad we stopped by.

Did you know that Hong Kong is also home to the world’s longest outdoor covered escalator system? I secretly like riding escalators just as much as I did 20 years ago — and so do all of you, be honest! — so personally I thought this 800-meter-long escalator system was pretty sweet:

Upon returning to Shenzhen in the morning, we said goodbye to Brady, and, armed with instant noodles and packaged cookies, we hopped on board our second high-speed train and traveled 1707 kilometers north to Zhengzhou, current residence of my friend Erika, a college professor. Unfortunately, it was so foggy that we couldn’t see much of the countryside out the train windows, but we enjoyed our trip regardless. It was indeed a speedy train: during our trips, the trains traveled most of the time at a speed of 300 kmh (around 186 mph).

We spent a lovely two nights and one day in Zhengzhou with Erika. She showed us around her college and introduced us to her friends and co-workers. She also took us to some pretty tasty street food, which is a quick and sure way to all of our hungry traveling hearts: 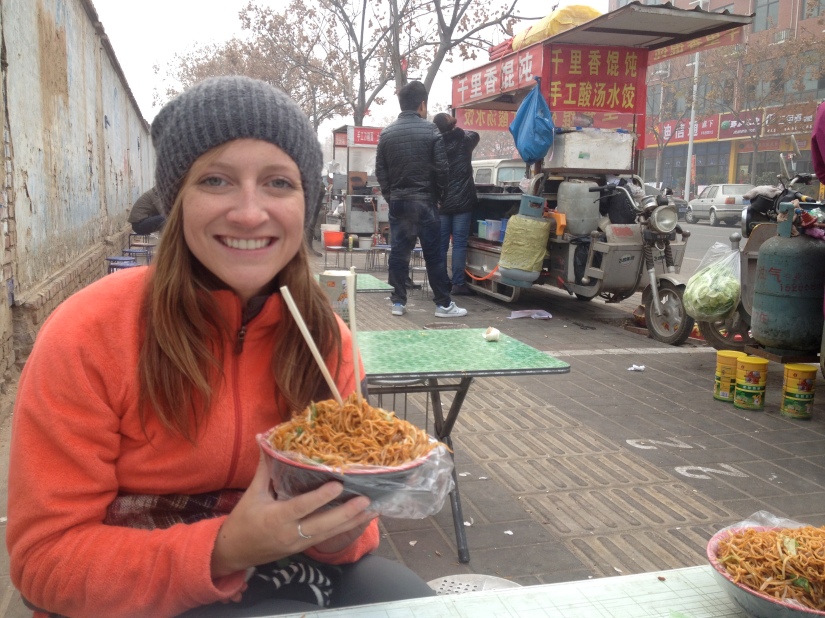 It was also getting increasingly bitterly cold as we went farther north. After spending two and a half months in tropical Southeast Asia, I would classify myself as a rather giant weenie when it comes to cold weather. (The only good news here is that China was doing its best to prepare me for my trip home to the brutal winter of North Dakota.)

Finally, we left Erika behind in Zhengzhou and commenced the third and final leg of our journey by high-speed train, 689 kilometers north to famous Beijing. We felt we were pretty experienced high-speed-train travelers by now.

That was a little irony, because we were still kind of just silly tourists in a very foreign country.

But we had at least figured out a few crucial tips about China train travel: First, the hot water dispensers located in every train car are invaluable for anything from instant noodles (in other words, cheap lunch) to hot tea. It took us until the last leg of the journey to figure out that they even provide paper cups for your tea leaves.

Second, they do have both squatty potties AND Western-style toilets in the trains. However, as I learned after waiting for what seemed like an hour for my preferred Western-style toilet and finally resigning myself to the local version, using a squatty potty on a swaying train — while it takes some skill and courage — is not actually so bad. (When in Rome, right?)

Finally, when you spend 2535 kilometers on high-speed trains in China, even more important than the flavor of instant noodles that you choose and the type of toilet that you use is the quality of your travel companions. And I had pretty good ones: 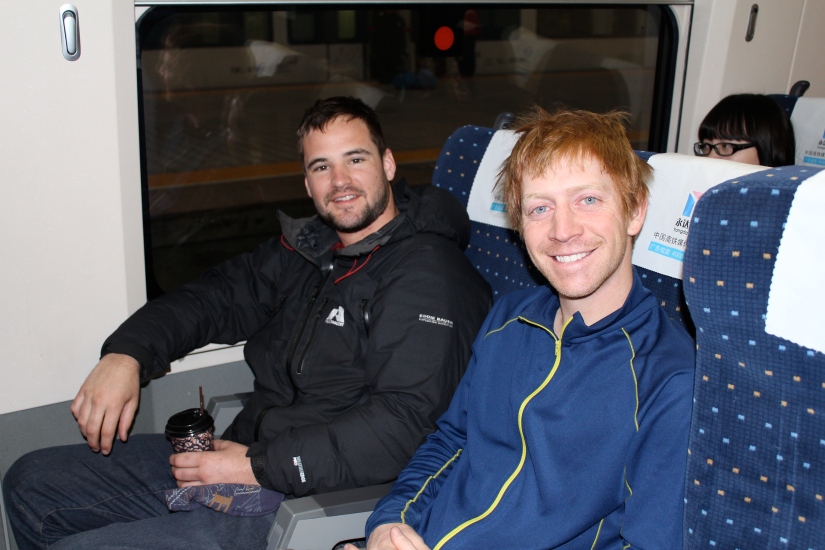