As part of our language training, we were instructed to go out into Pattaya, find someone of the local culture, and offer them a free one-on-one English lesson. What? This type of thing is not in my nature. I am not good at small talk with strangers and I also fail at everything related to sales. In college, I held a job for a while where we called and asked donors for scholarship money (basically: telemarketing). Every time I made a call, I wanted to apologize. “I’m sorry that I have to ask you this, but…”  Apologizing is not a good quality for a salesperson, but I hated asking. Those four hours a week were torturous.

To go out and try to get someone I don’t know to hang out with me while I attempt to improve their language skills for an hour seemed dubious. Plus, this would not work well in America. How would you even approach this? “Excuse me, but I notice your language skills aren’t up to par? I would love to help you out.” People would not only be offended, but would also be extremely suspicious of what we really wanted and get out of there as fast as possible.

However, we were told that English language lessons are highly valued by many people here. To take English classes costs money; to hire a private English tutor costs even more, anywhere from $10 or $15 on the low end to $50 or higher an hour. And wages in these Southeast Asia countries are very low, hence the inexpensive travel costs for Westerners. They want to learn English though. Knowledge is considered valuable, and as the influx of Western tourists is a large industry here, stronger communication in English is seen as an asset.

So, after a couple days of scoping out the area, I chose a young Thai waitress nicknamed Gif at a small local restaurant whom I had tentatively befriended. We had been there once or twice and she was bubbly, adorable, and seemed hesitant to speak very much English to us. Although locals have a much stronger grasp of English generally than we do of their language, some don’t want to embarrass themselves by speaking incorrectly. So one day when Tommy and I went in for lunch, I offered her the free hour lesson. (I didn’t even apologize while offering. Good job, Rachel.) To my surprise, she really did jump at the chance.

We met after Gif was done with work the next day at 9 p.m. She showed up, bubbly as usual, and as we conversed it became clear that she had stronger English skills than she originally let on. We had a great time talking about her life in Pattaya, her job at the restaurant, and my life in America. She had never heard of North Dakota, not surprisingly, but she seemed unusually interested in Texas. She also likes action movies, going to the beach with friends and misses her family, who live in another province. We worked on some of the pronunciation of items on her menu in English and also on some of the strange usage in our English language: For example, why does “down” mean to go lower, but if you say “down the street” you do not mean lower?

She also graciously taught me many words in Thai. Of the two of us, I was definitely the less advanced student. I know how she feels about feeling hesitant to completely butcher someone else’s language. She praised me for my every attempt though, which only made me like her more.

Here was my favorite part. At the end, I asked if there was anything she wanted to know in English. She said adamantly, “I need to know about buildings.” This threw me a little. What did she want to know about buildings? She wanted to know “who makes buildings.” So I explained, as best as I could, about architecture, about the building process, about contractors and construction crews. This seemed to satisfy her, but I just had to ask why she was so interested. She happily revealed that she has an American boyfriend named Patrick from Texas (which would explain her earlier questions), whom she met in Pattaya when he was on vacation and who works on building projects in different parts of the world. When he gets time off, he flies to Thailand to see her. When they communicate by phone or Skype, their only tool is her somewhat limited English as he knows no Thai. She claims that they really don’t understand each other a lot of the time.

Ah… Suddenly it makes sense why she jumped at the chance for this free English lesson.

But this Patrick better be a decent guy.

Because I feel like my new friend Gif is a pretty awesome girl. So I might have to step in and/or make some pretty serious threats if this Patrick is anything but nice to her.

This lesson wasn’t just beneficial for Gif. It forced me out of my comfort zone, which is exactly what I signed up for when I came over to Southeast Asia. I wanted several months of new experiences and I’m getting them. And they’re turning out to be worth it in every way.

Here is me and my new little friend (I can actually say “little” for probably the first time ever): 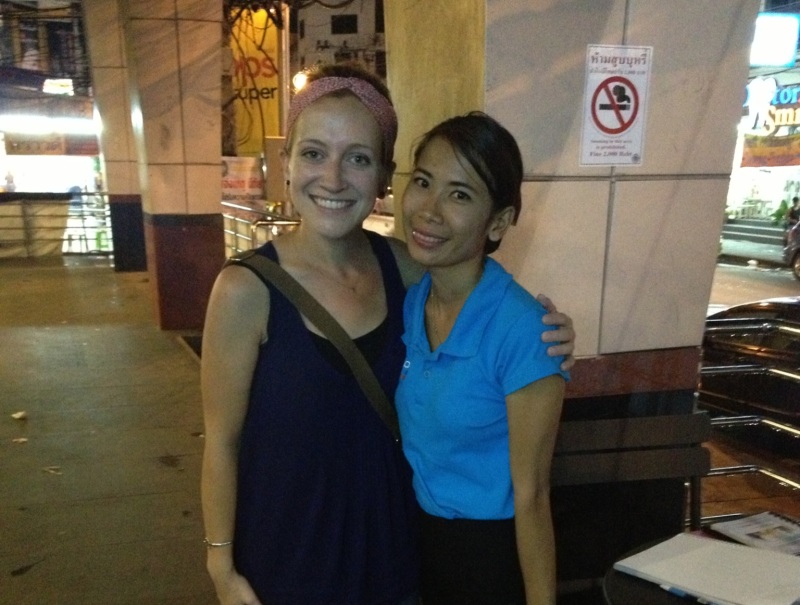