A Snow Day. I cannot believe it. I’m so in awe, that I’m honoring the Snow Day by capitalizing it. (That is how an English teacher uses the tricks of the language to show appreciation. Or proves herself to be a giant dork.)

This morning when I saw the voicemail on my phone from the familiar 444 school-alert number, my heart skipped a beat. But for all the times the voicemail notifications from the 444 number have appeared before 7 a.m., my hopes for a Snow Day never come true. So I listened to the voicemail eagerly, hoping at least for a late start that would allow me to sit and drink coffee at my kitchen table, a nonexistent treat during the work week.

It was even better than I had hoped: a real live Snow Day! I know that we will have to make it up sooner or later, probably at the end of the school year, but whatever. For now, it feels glorious. It’s like a present when it’s not even your birthday. It’s like a second Christmas. It’s like receiving a package in a snow-covered mailbox.

It’s like a warm summer morni– No. Too far.

I will say that Snow Days as an adult are a little different than they were growing up. Snows Days now come a little less freely, a little more burdened with grown-up responsibilities. I am not complaining, mind you. It’s just that now, Snow Days are a chance to catch up on chores and duties (yuck) that otherwise I wouldn’t have time to do. So, this morning after listening to the voicemail, I thought about basking in Snow-Day-ness by lying in my bed for another couple hours, then drinking coffee at my kitchen table for another couple hours, then immersing myself in my guilty pleasure, Pinterest, for another couple hours, then perhaps painting my nails a bright coral, and then… Well you get the picture. But an image popped into my mind: a stack of 16 research papers at school, sitting untouched, the only 16 remaining ungraded papers of the 60-some I collected a week ago. And a whole day of free time to work on them. Yuck again. But the image wouldn’t go away. So recklessly, I bundled up, went out into the snow to feed my dogs, and started my sturdy little Ford Escape to make the 13-mile trip to town to collect my grown-up responsibility.

No blizzard can keep an English teacher away from her true love, a stack of research papers.

Actually, that is not true. Grading research papers is not enjoyable. Of all my English teaching duties, it is my least favorite. But it’s also a duty I feel compelled to do, so every winter I spend a unit teaching freshmen the ins and outs of navigating the library and using MLA style and citing sources properly. It’s usually quite a mess, but if my students even come out of the unit with a somewhat-readable paper and an understanding of the word “plagiarism,” I feel I’ve accomplished something.

This morning, my motivation for driving to town in a blizzard was not so much for my students’ greater development in the world of research; but selfishly, the thought of getting the weight of the remaining ungraded research papers off my mind was just too irresistible to ignore. So to town I went. It really wasn’t that bad despite the hours of freezing rain we got overnight followed by hours of blustery snow this morning. I had to go 25 to 30 mph, but there were few vehicles on the road and even fewer trucks, a major relief. Of course, there is always the one idiot. Or two. On my way to town, I was passed by a pickup going about 50 on glare ice. Not smart. When I got to town 5 minutes later, he was only two vehicles ahead of me. Worth it? I think not. On the way home, I was passed by another pickup on glare ice. A few miles later, of course, he was backing out of the ditch. What is it with these guys?

I made it safely there and back, though, mission accomplished and research papers on the seat next to me. Once I got near our farm, our own road was nice and quiet, and the ice and snow stuck to the tree branches was so pretty I had to delay grading for a few minutes to take some pictures. It might be almost spring, but I still love winter storms. This one is even more bearable because we know that spring weather is indeed lurking somewhere around the corner, even a distant corner, and we won’t have many more of these blustery scenes until next winter. 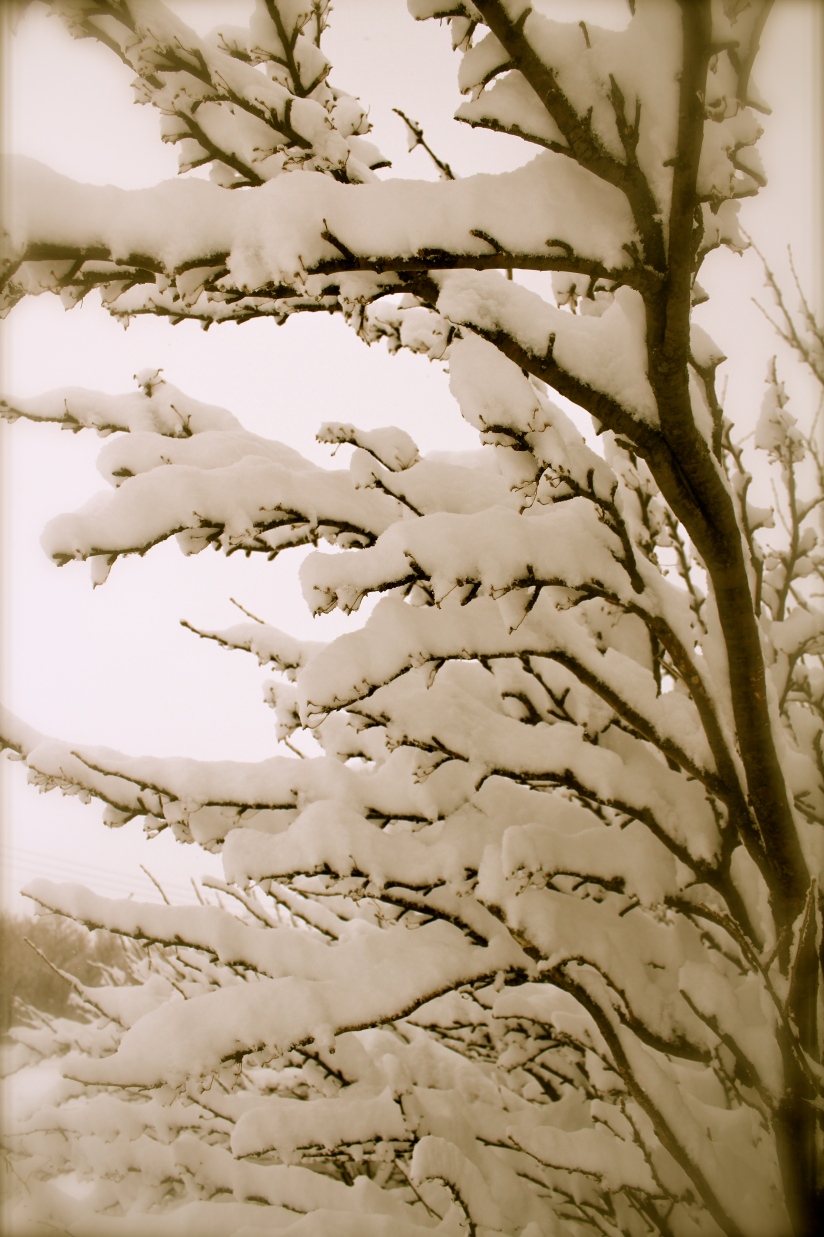 Now, several hours later, I’m safely in my house, drinking coffee in my kitchen, watching the wind blow and the snow pile up outside. My remaining research papers are graded. I have to admit, this Snow Day couldn’t have come at a better time, considering the grading and lesson plans that have been building up and the lack of time to get them done. It might not be the laziest Snow Day I’ve ever had, but I’ll take it. It’s a Snow Day, and that deserves some capital letters. Congratulations to the rest of you who were lucky enough to get one, too!

I even painted my nails.

Note to self: I might have to come back and read this happy post later this spring when we add on that extra day on the end of the school year!